OUR ANNUAL RISING STARS exhibition is a chance to showcase and support  upcoming artists as they forge their own path while sharing family stories and diversifying techniques.
Ten artists from five art centres, display a cross section of the diversity of work from the central desert to the Top End.

FROM THE SMALL COMMUNITY OF Peppimenarti in the north-west Top End, Anastasia Naiya Wilson has been consistently developing a body of work using the wupun (coil basket) stitch as inspiration. She is the daughter of well known Durrmu artist Regina Wilson and they share this interpretation of the woven stitch, albeit in their own styles. Anastasia's work was featured in the Salon des Refuses for the past two years.

TJALA ARTISTS from the Ken family continue their tradition for strong work. Serena Ken, like her mother Sylvia, paints the Seven Sisters story. Brenton Ken is brother to Freddy whose loosely painted and very striking spear paintings have been shown at Outstation over the past six years. Freddy's influence can be seen here in the painterly abstraction and verticality of Brenton's work.
The work of Janie Kulyuru Lewis is identifiable as a Tjala artist showing the tonal variation of landscape, while the works on paper by Paniny Mick are dynamic with the fluid movement of black graphic lines and detail.

FROM ERNABELLA are three artists working in very different yet no less striking styles – Unurupa Kulyuru, Rachel Lionel and Imiyari (Yilpi) Adamson. Rachael Lionel was a finalist in the 2016 National Aboriginal and Torres Strait Islander Art Award (NATSIAA) and her work was acquired by the Museum and Art Gallery of the Northern Territory (MAGNT).
The bold and jubilant work of Mary Brumby is a wonderful contrast to the subterranean-like detail of fellow Iwantja artist Julie Yatjitja whose subtle change in tone creates movement and a shimmer of light through the picture.

Also previously shown at Outstation is the work of senior law man Willy Muntjantji Martin of Mimili Maku with a set of three new works for this exhibition. 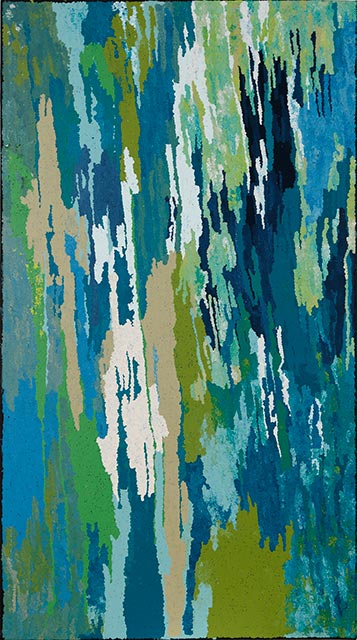 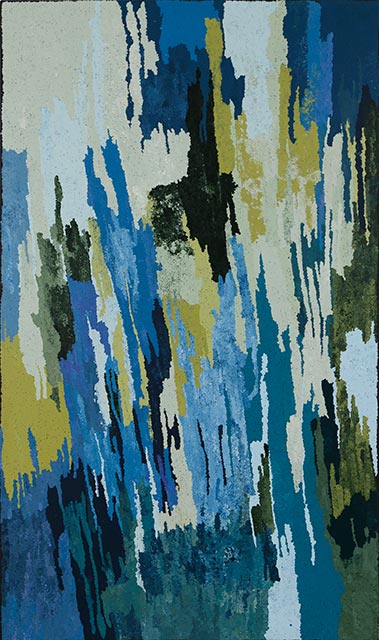