Kujungka Art – All the Men

Kujungka Art – All the Men

‘Kujungka Art - All the Men’

All the art for everybody together - all the men.

Sharing stories of culture and identity, ‘Kujungka Art - All the Men’ breaks with classic Mangkaja tradition to present an unusual body of work uniting male artists from the Fitzroy Valley region of the Kimberley in Western Australia.

Paintings on canvas, board and tin are complemented with beautiful objects of culture, tradition and functionality.

Senior artist Ngarralja Tommy May continues to experiment with different mediums into his long artistic career. A combination of works on board and canvas are presented depicting elements of jila (living waterhole) in his country. Jilji– sandhill country. – and Bila (the flat country in between the Jilji) depicts the undulating textures and colours found here.

Experimental practice has become standard for John (Prince) Siddon, a founding member of Mangkaja Arts, who has borrowed the traditional Kimberley craft of boab nut carving in his work. His reimagined vignettes of the Narrangkarni (Dreamtime) are manifested in fine enamel engravings on tin and meticulous figurative linework in a psychadelic explosion of colour and pattern onto traditional wooden coolamons.

In stark contrast, great beauty can be found in the simplicity of Hanson Boxer and Illiam Nargoodah’s objects featured in the exhibition. Boxer’s suite of karli (boomerangs) are carved from Blood wood and oiled with goanna or kangaroo fat. Once functional and used for ceremony, hunting or play, the objects are not only sublime artefacts but elegant works of contemporary art. As are Nargoodah’s hand-crafted knives. A finalist in the 2017 National Aboriginal and Torres Strait Islander Art Award, Nargoodah is gaining exposure for these quirky objects. There’s a subtle nod to the region’s cattle station history, with the objects being constructed from recovered materials from stations such as sheep shears, bone, steel posts, mudurra wood, hose and copper pipe. Gooniyandi man Mervyn Street further acknowledges the area’s history in his classic depiction of pastoral life in the Kimberley with his painting ‘Droving Days’ and the large-scale ‘Bull Ride’ work on board.

Outstation is very proud to present a special body of work by legendary senior artists and law men Nyilpirr Spider Snell and Mawukura Jimmy Nerrimah (both deceased now). Their paintings of law and land are not solely about country, but embody rich personal narratives of their relationship to it and their community. A Walmajarri man, Nerrimah painted sacred stories from his country in the northwestern region of the Great Sandy Desert, where he grew up moving between significant waterholes.

Wangkajunga ceremonial leader Spider Snell’s works are highly distinctive, due to the use of contrasting colours yellow and blue, which are utilized to represent stories from the rainmaking dreaming he was custodian for. Dance was core to Spider’s artistic practice, and you can literally feel this energy pulsating across the substrate with his compelling mark-making and colouration.

Snell passed down artistic and cultural knowledge to his grandson Putuparri Tom Lawford, who presents a magnificent headdress made from paperbark, spun human hair and decorated with paint and cockatoo feathers to represent the clouds that appear before the rain. A finalist in the Blake Art Prize in 2016 this incredible work is traditionally used in Rainmaking ceremonies at Kurtal, a sacred Wangkajunga and Walmajarri site in the Great Sandy Desert. 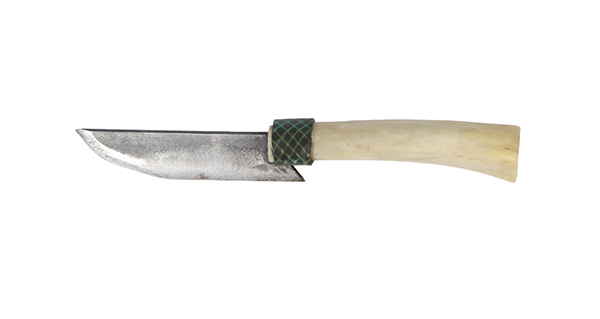 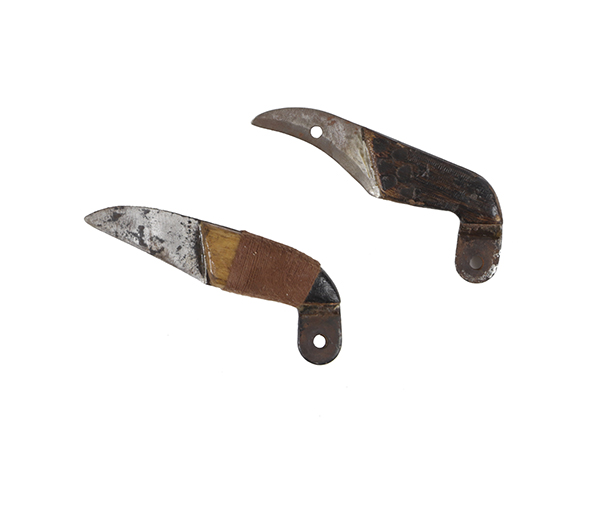 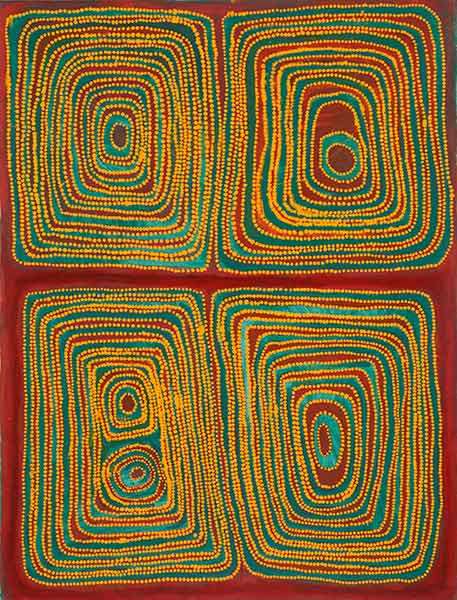 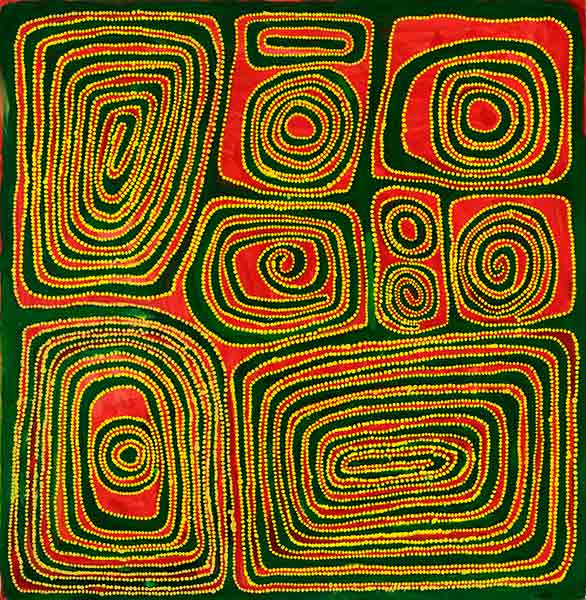 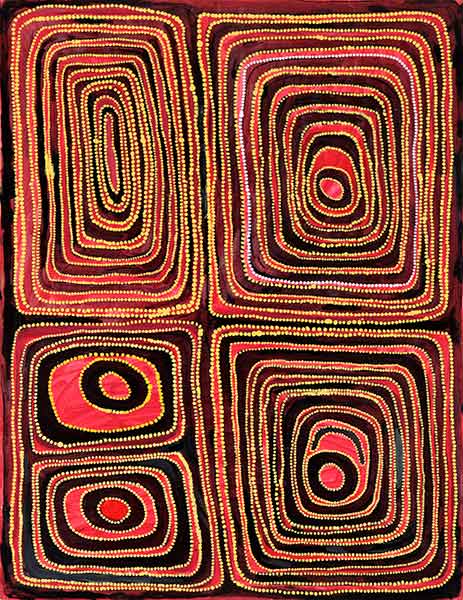 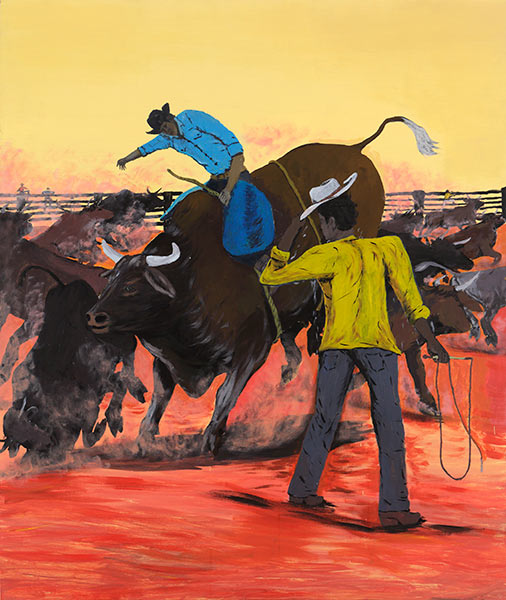 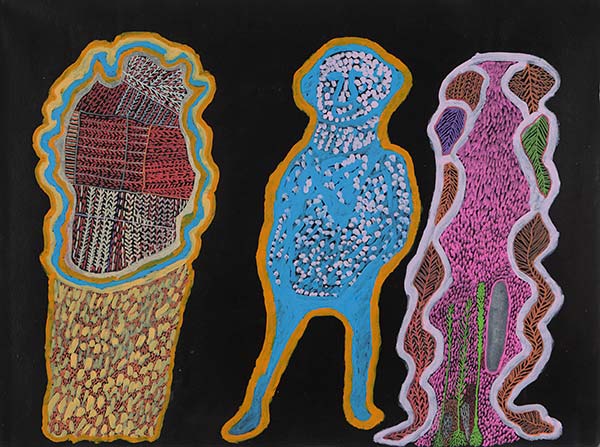 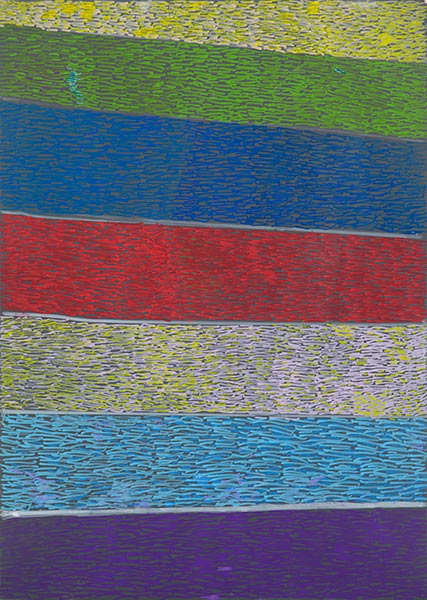 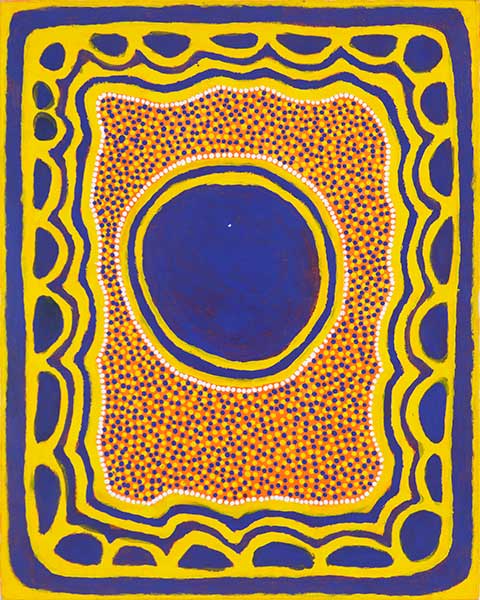 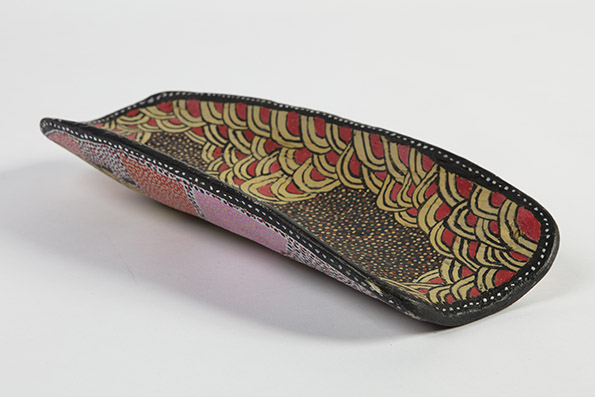 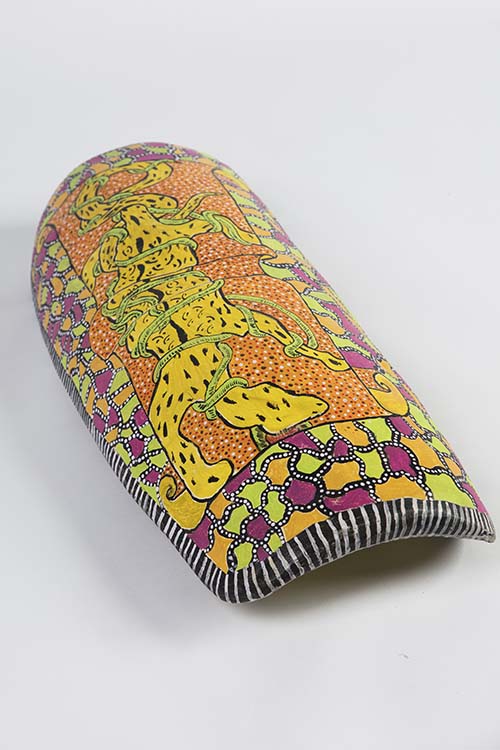 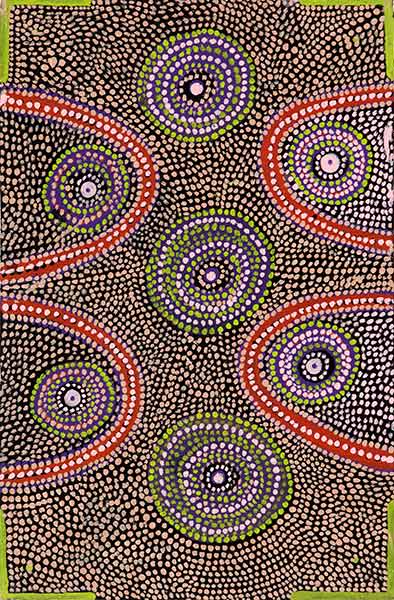