This month we are proud to present extraordinary works on paper by Injalak artists for the first time.  Injalak Arts represents Kunwinjku speaking people of the Arnhem Land community of Gunbalunya and the surrounding homelands.  We feel strongly about supporting this major art centre as they re-emerge.

This exhibition features  Graham Badari and Maath Maralngurra. Superb draughtsmanship, intricate detail and finesse of the linework, impart an exquisite quality to these works. The dense opacity of the ochre, also provides a striking graphic flatness to the paper texture.

Maath Is one of Injalak’s most exciting up and coming artists. His work is based in his deep love and understanding of Country that developed while working as a ranger in his mother’s Country of Kabulwarnamyo. His work there involved land management and caring for rock art in traditional ways. In the past few years he has focussed on developing his art practice and creating a larger body of work.

He draws inspiration from the long line of artists in his family, including his great grandfather Paddy Compass who’s art is housed in Museum Victoria, his grandfather Lofty Bardayal Nadjamerrek, and father Gabriel Malarngurra. This strong tradition is demonstrated through the extremely fine rarrk, combined with bold shapes that his work is known for.

Graham is one of Injalak’s most senior artists. While he lives in Gunbalanya his country is Maburrinj, in the rocky escarpment country about 120 kilometres east of the community. He draws artistic inspiration from this environment and paints the Dreamings of his Mother Country, Djurlka, where he spent time as a young man near the outstation of Marmardawerre. His love of birds, both native and non-native can be seen in his work.

Graham was raised by the renowned artist Djawida Nadjongorle, but like many of the artists at Gunbalanya credits the late Thompson Yulidjirri as his greatest artistic influence. From these senior men, Badari learnt the fluid and dynamic figurative style that defines Kunwinjku painting at Injalak Arts. He began painting sporadically around 1990, but has since become part of a group of dedicated and innovative artists at Gunbalanya.

His paintings show the influence of the visual language of their rock-art heritage, while remaining committed to artistic innovation. It is this beguiling balance of tensions, innovation and tradition, ancient and modern, beauty and terror, that energises Badari’s paintings. 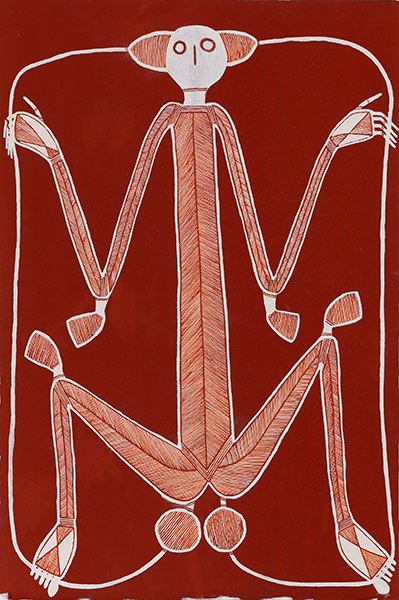